A deeper look into the roots of Water Crisis in India

The issue of water scarcity is a global problem. The unequal distribution of water resources, and the great demand of freshwater globally has led to what the World Economic Forum calls as one of the largest global risks in terms of potential impact over the next decade in 2019. The increase in demand for freshwater is a result of, but not limited to, the increasing world population, changes in consumption, and industrial demands. Further, the great inequity between the developed and developing countries, in terms of water resources, grows larger as drinking water and water usage is becoming privatized and coupled with economic growth. This has led to Lower Economically Developed Countries (LEDCs) to lose opportunities to gain water resources due to shifting government priorities. 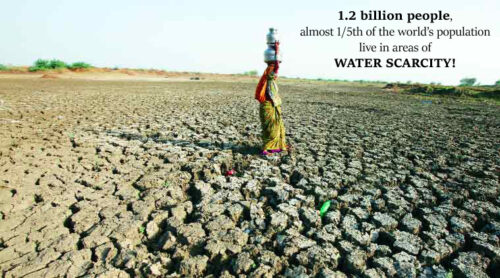 The issue of water scarcity is best seen from the perspective of India, a crisis which affects approximately 1 million people a year. The water crisis playing out in India today can be seen as a microcosm of the overall situation that will, or already has, affected many countries in the world. Private water tank owners illegally smuggle and sell clean water at expensive prices, greatly exacerbating the issues of the water crisis in the first place. That, coupled with infrastructural issues and climate change, the issue of water scarcity in India is surely important to examine. This blog seeks to examine the causes of water scarcity in India, the effects it has on the population, and the possible solutions that already exist and/or should be implemented at a local and a national level.

Causes for the Water Crisis in India

The two major monsoons in India, the North-East and the South-West monsoons, account for a large proportion of water that can be harvested and distributed. However, as a result of climate change, monsoons are being disrupted and losing a lot of water.

According to the India Meteorological Department in 2018, the North-East monsoon was deficient by 44% while the South-West monsoon fell short by 10%. Lower rainfall has reduced water levels by about 32% in 91 major reservoirs across the country.

As stated by Impakter, “Unusual temperatures caused by climate change have made rainfall erratic with significant changes in monsoon patterns making droughts and floods more common in many parts of India.”

• Infrastructural issues are another major factor in the water crisis in India. Many major cities in India lacked a long-term water management plan. This has led to pollution being diverted towards major rivers, a lack of infrastructure designed to collect and harvest rainwater, and thus an overall wastage of water. Sewage, industrial waste, and ashes from religious ceremonies accumulate on the river Ganges, polluting the river as it travels Southeast.
• The rapid urbanization of India coupled with a lack of city planning has led for former ponds to be used up due to the rising population and a general lack of infrastructure used to treat wastewater for reuse nor an appropriate method of collecting and distributing water.

According to the Central Water Commission, the country still receives enough rainfall to meet the needs of over 1 billion people. Yet, due to poor city planning and the growing population, India only catches only 8 percent through inefficient rainwater harvesting.

Effects of the Water Crisis in India

The water crisis in India affects hundreds of millions of people. Though a lot of Indians are capable of purchasing drinking water from private distributors, rural Indians are faced with walking kilometers away to reach a well or public water pump. Indians who are unable to purchase water are forced to dig borewells, especially in times of crisis. 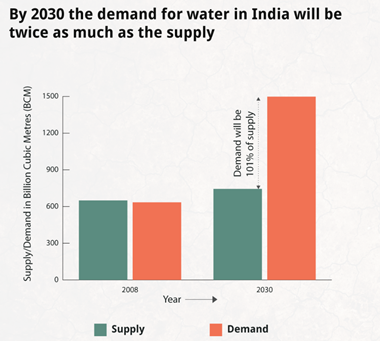 First, in June 2016, Latur faced the depletion of approximately 90% of water sources. Next, in 2019, Chennai completely depleted its water supply on the 19th of June, because of deficient rainfall in the previous year’s monsoons.

The vibrant ecosystems of India, and the lives of the indigenous flora and fauna, are threatened by this lack of water. In 2016, the Indian cities of Mettur and Kolathur, in the face of a drought, saw wild animals like elephants, tigers, and deers sneaking into the city in search of water. Indian gaurs in Madurai, Tamil Nadu wound up dead as they fell into wells in search of water.

Agriculture makes up about 16% of India’s economy, according to the World Bank in 2019, and employs almost 44% of India’s working population. In the absence of water, farmers wouldn’t be able to produce crops. This causes much of the farming industry in India to cease operations, collapsing the local economies of smaller Indian towns. This has led farmers and other workers in the agricultural sector to move out into cities in search for jobs. However, this increases the demand for water in major cities, and further complicates the strain that major Indian cities have on the scarce supply of water.

Efforts to the Water Crisis

The Government of India has established a new ministry and launched cleaning programs in order to increase the whole country’s water use efficiency. Firstly, the Jal Shakti ministry was formed by Prime Minister Narendra Modi in June 2019. It combines the Ministry of Water Resources, River Development and Ganga Rejuvenation, with the previous Ministry of Drinking Water and Sanitation to form a specialized ministry to clean the river Ganges, settle international water disputes, and provide safe drinking water to the people of India. The Ganga Action Plan was started in 1985 to tackle the problem of water pollution in the river Ganges, however government incompetence hindered the action plan to be anywhere close to efficient. Prime Minister Narendra Modi announced that his government would be investing more into managing the pollution of the various rivers in India.

Non Government Organizations (NGOs) like ‘FORCE’ and ‘Safe Water Network’, along with international organizations such as ‘We are Water’ and UNICEF are actively working to provide water supply and sanitation to villages and dealing with the overall water crisis in India. One way NGOs help is by raising social awareness of these issues. Many smaller NGOs use social media, advertising campaigns, and engaging with local people in order to educate how to manage water efficiently at a local level. For example, ‘We are Water’ publishes documentary films every year to raise social awareness on the severe water scarcity issues of India, along with other countries’ scarcity issues as well. Another way NGOs help is by creating Water Resources Projects. For example, UNICEF supported the creation of a 1000+ hectare catchment plan near Ahmednagar, Maharashtra strictly for domestic usage. The Jal Bhagirathi Foundation is prominent in Rajasthan for covering over 550 villages and reviving more than 2000 water harvesting resources in the region.

As technology improves, new innovations allow ways to manage water resources more effectively, and possibly solve the water crisis in India. One such technology is rainwater harvesting. A lot of homes already, in India, have rainwater harvesting structures in order to be self sufficient. In Banglore, Biome Environmental Trust and Friends of Lakes dug upto 1 million of these rainwater harvesting wells and connected them to the groundwater, collecting about 60% of total rainwater in the region. Desalination, or the process of treating sea water to make it fit for drinking, is a technique that can solve the problem of water shortages, especially in coastal cities. Israel has already utilized desalination for industrial and domestic use. The Indian government is already looking into desalination technologies, especially for coastal cities like Chennai. Another technology used to manage water resources is the smart water meter. WEGoT, our startup company in India, has innovated on the old analogue design of a water meter and created a new product that uses ultrasonic sensors to monitor water flow with more than 98% accuracy accompanied with a digital app to monitor your water usage intuitively with a simple UI. The installation and usage of this technology is seamless and can greatly benefit both the common customer and larger organizations who wish to manage their water consumption. Finally, irrigation techniques such as drip irrigation technology efficiently controls the amount of water to land and can possibly relieve the water scarcity in India for decades.

The issue of water scarcity in India already has long reaching effects, some of which can already be seen today. Although some factors, such as city planning, cannot be immediately changed to solve this problem, new technologies can definitely help alleviate and possibly reduce the intensity of this issue in India. Though the government of India is finally investing more resources into solving this problem, it’ll take the cumulative effort of every single Indian citizen to conserve their own water, and the effort of the government to implement costly, yet effective, technology and infrastructure to distribute water evenly throughout the country. And with hope, this issue can be finally solved and put to rest.

Why an Op-Ex Model Makes Sense for Water Management?